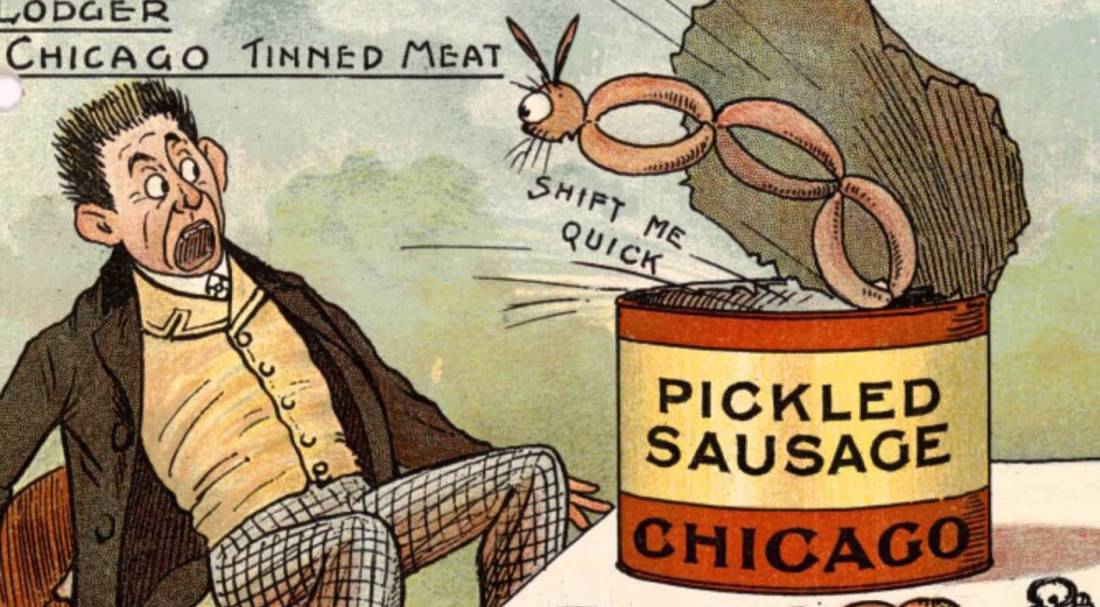 “The meat would be shoveled into carts, and the man who did the shoveling would not trouble to lift out a rat even when he saw one—there were things that went into the sausage in comparison with which a poisoned rat was a tidbit. There was no place for the men to wash their hands before they ate their dinner, and so they made a practice of washing them in the water that was to be ladled into the sausage. There were the butt-ends of smoked meat, and the scraps of corned beef, and all the odds and ends of the waste of the plants, that would be dumped into old barrels in the cellar and left there. Under the system of rigid economy which the packers enforced, there were some jobs that it only paid to do once in a long time, and among these was the cleaning out of the waste barrels. Every spring they did it; and in the barrels would be dirt and rust and old nails and stale water—and cartload after cartload of it would be taken up and dumped into the hoppers with fresh meat, and sent out to the public’s breakfast.”

This quote from Upton Sinclair’s 1906 novel ‘The Jungle’ became one of the most influential publications of the Progressive Era, a period of unparalleled social and political reform across the United States and sadly a period almost nonexistent in the minds of many Americans. ‘The Jungle’ tried to illustrate the inhumane, unsanitary conditions thousands of workers in the meatpacking industry were forced to work under around the turn of the past century. Sinclair’s exposé became an immediate hit. The book’s influence was so widespread that it even led President Teddy Roosevelt to promulgate a series of major groundbreaking industry reforms, including the Meat Inspection Act and the Pure Food and Drug Act. Apparently, Roosevelt became mighty disgusted by ‘The Jungle’s findings while reading a copy of Sinclair’s novel during a breakfast at the White House. He was so outraged that only four months after the book’s publication Congress was already working on passing legislation to regulate the food industry in America.

Roosevelt’s actions against the meatpacking industry signified a turning point for American capitalism. Corporations were no longer going to be left unchecked. For the first time in American history, the government was getting ready to play a vital role in the economy. Prior to Roosevelt’s reforms, the American government did very little other than overseeing the nation’s foreign affairs. Capitalism was producing an enormous amount of wealth, but the rapid pace at which the economy grew was creating a whole new set of problems. Child labor, overcrowded factories, extremely long hours for extremely low wages, and the appalling sanitary conditions of the factories had journalists like Upton Sinclair deeply concerned, so they decided to take action.

Thus began the rise of the “muckrakers”. During the Roosevelt years, this term was used to refer to reform-minded investigative journalists who were dedicated to expose as much corporate and political corruption as they could. Feared by a large part of the ruling class, the muckrakers used popular magazines and newspapers to spread the word and inform the public about the ills of society. The success of ‘The Jungle’ turned Upton Sinclair into one of the most prominent muckrakers of his time. Roosevelt, who is often credited for coining the term “muckraker”, was never a big admirer of  Sinclair. In fact, he once referred to Sinclair as a “crackpot” who is “hysterical, unbalanced, and untruthful”. Of course, that all changed with the release of ‘The Jungle’. Roosevelt was known for his stubbornness and belligerent personality, but that didn’t keep him from facing the truth when presented with the facts, a trait desperately needed in today’s politicians.

Muckrakers played a vital role in shaping the America we know today, and their influence didn’t stop with the implementation of ethical rules at manufacturing plants. Their work also led to the end of Standard Oil’s monopoly over the oil industry and to the creation of the first child labor laws in the United States circa 1916. We owe these guys big time. Sadly, muckraking is no longer what it used to be. I would even go as far as to say that muckraking no longer exists.

If there’s something I’ve learned from this campaign is that the world of journalism has stopped being objective altogether. Journalists no longer strive for independence. They don’t seek the uncovering of any wrongdoings. Instead, they break bread with the elites. They’ve given up fighting for neutrality and they’re all too happy to support the status quo.

Tonight Washington D.C.’s political big shots and renown journalists of all stripes will gather for their annual White House Correspondents dinner. President Obama will probably delight us with a couple of amusing jokes, but this event represents nothing more than the all too obvious existing partnership between the powerful and the media.

Free press is necessary for two reasons: Keeping the people informed and spreading the word to fight corruption and immorality. The latter, unfortunately, is no longer a priority.

I pray so that sooner rather than later the muckrakers of our time will wake up to serve the people with independence. We desperately need our very own Upton Sinclairs.

What are you looking for?

Thank you for stopping by!